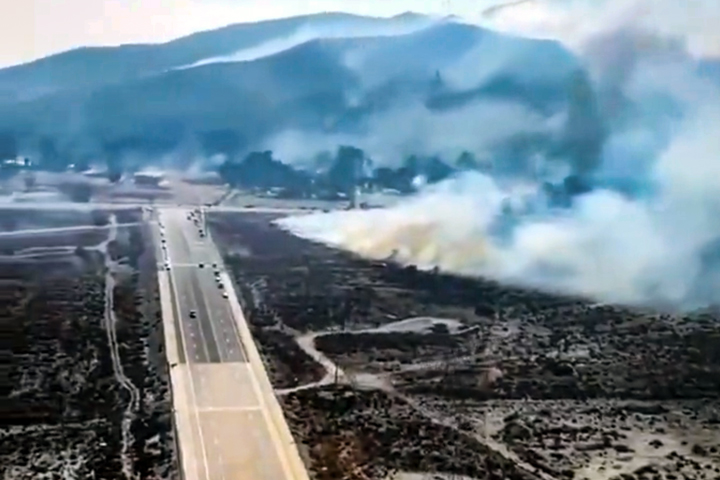 The South Fire started at about 3:00 near Lytle Creek Road and Duncan Canyon just north of the I-15 freeway and has grown to over 500 acres.

UPDATE: August 29, 2021, at 10:30 am, The South fire is currently 819 acres in size, with 30% containment.  Resources have been ordered and are arriving on scene to continue fire suppression efforts.

Evacuations Orders are in place for all residents from Lytle Creek Rd North & South of the Ranger Station, West of Sierra Ave., North of the I-15 and East of Duncan Canyon Rd.

Evacuation Warnings have been issued for all residents North of Glen Helen Parkway, East of Sierra/Lytle Creek Rd., and West of I-15.

UPDATE: August 28, 2021, at 2:08 pm, the South Fire has burned 819 acres and is 10% contained. All evacuation orders and warnings remain in place. According to USFS Fire officials “Utility workers an other personnel continue to mitigate hazards along the narrow roadway of Lytle Creek Road.”

A forest closure is in effect in and near the fire area and any recreational sites. Citations may be issued to anyone in the area. The weather is expected to reach triple digits with humidity in the low teens, which will continue to dry vegetation. Winds are expected out of the south with thunderstorms expected on Sunday and Monday to bring outflow winds which could effect current containment lines.

Evacuation orders are in place for all structures along Lytle Creek Road including side roads, from Duncan Canyon Rd. to its termination at Stockton Flats Road.

Evacuation Warnings are in effect for the north side of Glen Helen Pkwy between Lytle Creek Road and I-15 Freeway.

UPDATE: August 26, 2021, at 5:30 pm, the South Fire has burned over 700 acres and is still 0% contained. The main part of the fire seems to be burning on the east side of Lytle Creek Road, just past Mayer Canyon Road. Winds picked up in the late afternoon, which prompted a few flareups, including three new fires in the area of Duncan Canyon, near the origin of the fire, according to SBNF. The southbound I-15 freeway south of Sierra Ave was closed due to fire and smoke at about 4:00 pm. Several aircraft are working the fire as firefighters attempt to stop the fire’s forward movement from reaching the town of Lytle Creek and hold the fire to the east of Lytle Creek Road. Evacuations orders are still in effect for residents from Lytle Creek Road north and south of the ranger station, west of Sierra Avenue, north of the I-15 Freeway, and east of Duncan Canyon Road. Evacuations warnings are in effect for those north of Glen Helen Parkway, east of Sierra Avenue and Lytle Creek Road, and west of the I-15 Freeway.

UPDATE: August 26, 2021, at 9:00 am, the South Fire has grown to 700 acres with 18 structures destroyed, four of which may be homes. Containment is still at 0%. Evacuations warnings are in place North of Glen Helen, east of Sierra Ave./Lytle Creek Road west of I-15 Freeway.

Crews worked through the night with the help of a night-flying helicopter. The fire appears to have stared near the I-15 Freeway and is moving in a northeasterly direction. According to a Cal Fire map, the fire is burning near Mayer Canyon. Lone Pine Canyon Road has been closed between East Canyon and Swarthout Canyon road due to the fire. Residents and emergency vehicles still have access.

As of 7:00 pm, August 25, 2021, the South Fire is burning north in the Lytle Creek area. The fire is 0% contained and has burned about 500 acres. Over 600 homes and structures are threatened, while over 500 firefighters are battling the blaze. There are reports that the fire is starting to slow down, with good progress being made where the fire is actively burning. Unfortunately, several homes have been lost. Evacuation orders have been issued for Lytle Creek and the communities north of the ranger station. Most fixed-wing aircraft have been called off of the fire for the night; at one point, over eight tankers were dropping on this fire. An evacuation shelter has been established at the Jessie Turner Community Center in Fontana (15556 Summit Ave.). Large animals can be evacuated to the San Bernardino County Animal Shelter in Devore (19777 Shelter Way). An information hotline has been established at 909-383-5688.

At about 3:00 pm on Wednesday, August 25, 2021, the reports began coming in of a brush fire in the Lytle Creek area near Lytle Creek Road and Duncan Canyon Road. Officials reported that the fire had started when an excavator operated in a Lytle Creek-area backyard struck a rock. At this time, the fire had burned about ten acres. By 4:00 pm, the fire had jumped to almost 200 acres with multiple engines and several aircraft attaching the forward progress of the fire and laying retardant lines to protect structures. The gas station, McDonald’s, Jack-in-the-Box, and the other business located at Sierra Avenue and I-15 could be seen covered in red retardant as local news choppers arrived on the scene. Residents of the Tri-Community could smell and see smoke as the fire grew and ash was reported falling in Oak Hills. 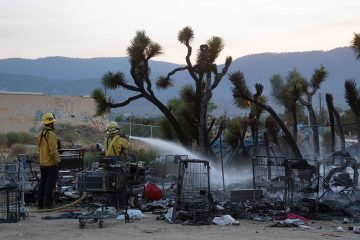 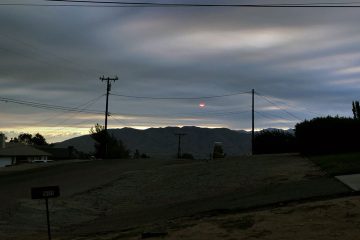 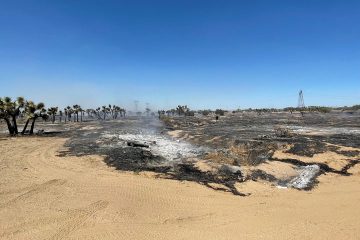 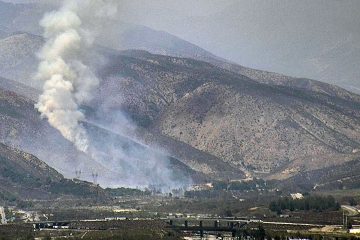