Perry Whitaker, age 79, passed away at home on January 12, 2021 after several weeks of fighting COVID-19.  Perry was born in Gravette, Arkansas, on August 25, 1941.  He and his family moved soon after to Oakville, Iowa, where he grew up on a much-loved farm with his loving family.

Perry went to college in Overland Park, Kansas at Kansas City College and Bible School.  There he studied to be a minister.  This is where he met Priscilla (Douglas) Whittaker and married on June 23, 1962.

Perry, with his bride, moved to California in 1964 and pastored at the Whittier Church of God (Holiness).  While being a small struggling church pastor, it became necessary for him to look for a job.  He found full-time work with a Christian-operated lumber mill called Richardson Mill and Lumber Company how he loved doing carpentry work.  He stayed with this company until they closed the shop.

In 1982 Perry moved his family to Phelan, CA.  He often said he was “finally at home living in the country again.”

After a while, he learned they were starting a new church in Phelan.  This was just great. He could feel useful again.  For 30 plus years, the New Life Nazarene Church was truly his church to worship in.  Perry loved his church and church family and was always faithful to serve in any way he could.  The church and the people there remained in his heart always.

His mother, Ethel Myrtle (Hutton) Whitaker, and father, Charlie Henry Whitaker, preceded him in death.  Along with his two sisters Esther (Whitaker) Pridey and Bessie Whitaker. 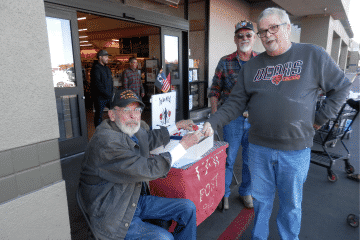 Poppies and Performances for Veterans of Foreign Wars 9415