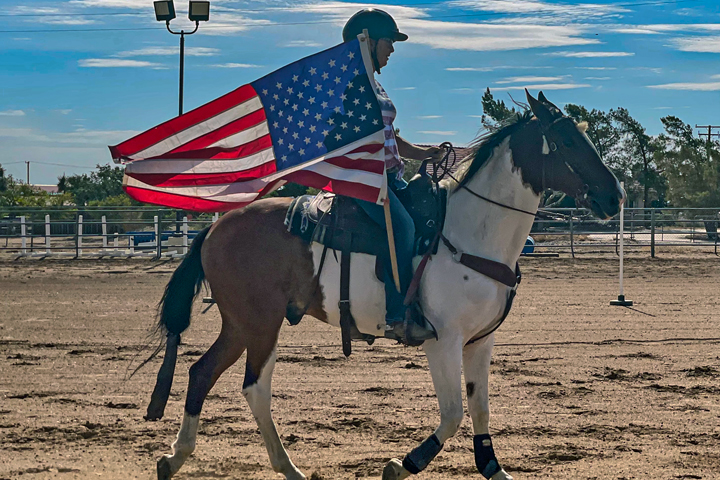 Marjorie Coulter rides into the arena patriotically displaying the American flag during the national anthem.

Located just off Baldy Mesa Road is a horse boarding and training facility called The Neighborhood Ranch, owned and operated by Marianne Ralph of Oak Hills. She has several years of horse training experience. Ralph’s facility offers both Western and English style riding, which is hard to come by since most trainers in the area offer primarily Western. Ralph was eager to spread her love of English riding to the horse riding community. In the process, she connected with fellow horse trainer and owner of Skyes the Limit Ranch in Apple Valley, Sofia Blanco. The two hosted a training clinic in April, which was widely successful, and shortly after, Blanco created the High Desert Riders Club. “The main reason I started the organization was because of the lack of education and resources in the equine community,” said Blanco. HDRC is determined to be an all-inclusive club, and its mission is to “…host equine-based events to bring the community together and unite riding disciplines as one.” Which is exactly what they aimed to accomplish at their first-ever Play Day event.

On Sunday, July 17th, the HDRC offered riding competitions, games, and safety outreach to the horse riding community at the Neighborhood Ranch. The opening ceremony started with a broadcast of the national anthem followed by a prayer led by Pastor Chris Allen, the founder of Cowboys-4-Christ, a faith-based non-profit in Apple Valley and the main sponsor of the Play Day event. Allen was enthusiastic about being a part of the cause stating, “That’s why I support this event. Gives kids the opportunity to learn who wouldn’t be able to afford it.” Several attendees mentioned that events like these exist primarily down the hill or in other states, which can be costly to travel to, but HDRC is committed to having quality equine events here at home and making it more accessible for riders. The club even offers a membership discount for all their events and clinics.

The day began with pole bending and barrel classes. In these events, each rider is timed while they display the technical skills of weaving through poles or around barrels set up in the arena. Riders of all levels showcased their talents and horses’ abilities. Awards were presented for the fastest time in various categories, including long pole, short pole, single pole, and speed barrel. Erin Sandbakken of Phelan competed in the events and mentioned it was her first time at the Neighborhood Ranch. Sandbakken relocated from Moorpark, CA, last year to afford more land and have her horse, Atlas, on her property. Sandbakken has been riding for 17 years and said she joined HDRC because “There is not a lot of English rides in the area, and so it’s important for me to support that effort.”

The San Bernardino County Fire Department was also in attendance to educate the public on their Urban Search and Rescue Team. Fire station 305 in Oak Hills is where Training Officer Robert Edie has been developing their large animal rescue program. The specialized team offers technical services for emergency situations such as an overturned horse stuck in a hillside or a wounded goat caught in treacherous terrain. Officer Edie led a demonstration highlighting the impressive equipment used for animal emergencies, including pickets, rope systems, and slings. Edie stated, “Animal control doesn’t have the equipment or the emergency experience that we offer. We serve the entire county, especially the north desert and mountain communities.” Approximately one dozen firemen are currently certified for large animal rescue in the SBC Fire Department. Still, Edie hopes that as the program continues to grow, the community will become more aware of its unique services and available aid.

The event brought riders together throughout the community, and 10% of the proceeds were donated to the local Phelan animal rescue, Mea Olas Place. The High Desert Riding Club will host a horse clinic at the Neighborhood Ranch on August 14th. If you are interested in attending the event or joining the club, then be sure to contact Sofia Blanco through the HDRC website, on social media, or at highdesertriders.com. 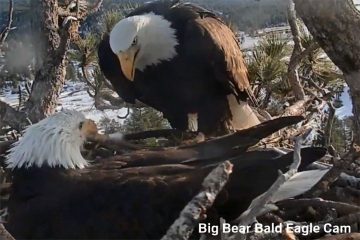 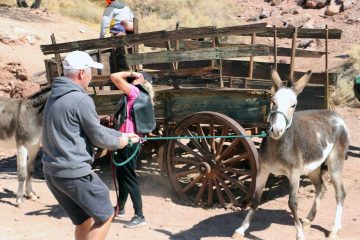 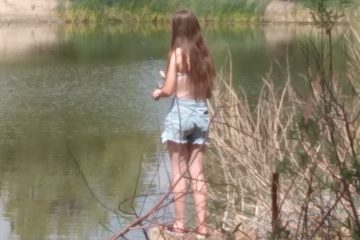 Find Relief From The Heat At Jackson Lake 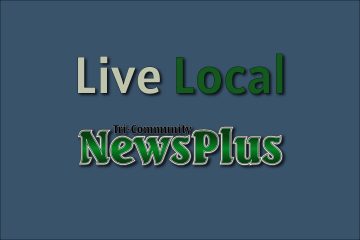