It was a “Blues” Christmas in Wrightwood 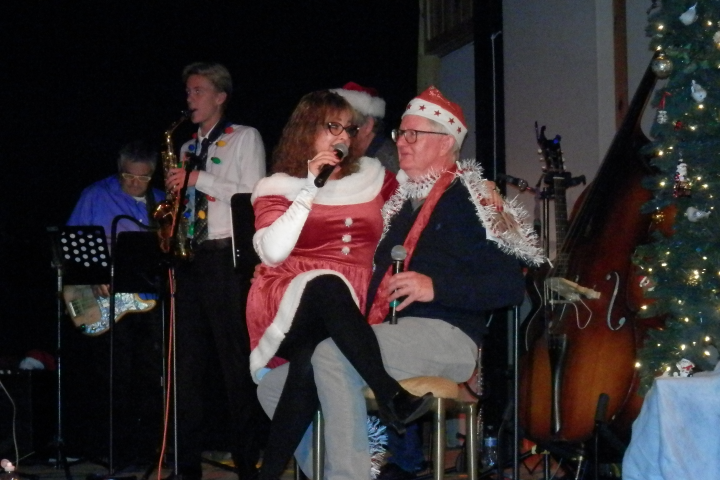 Adding to the beauty of the Christmas season, a joyous celebration of holiday music, dance, and comedy was held at Wrightwood Place Saturday December 17, 2022. The brisk night air, chilled by pine-needle topped snowdrifts, made it perfect to come in from the cold, for a cozy, evening dinner show. Wrightwood Place was decked out with elegant cloth table settings and festive floral centerpieces from Brier Rose Design. To top things off, the catered dinner from The Village Grind, was a hard act to follow with Mushroom Chicken Pasta and dinner salad and a soft garlic breadstick, with the choice of Chicken Marsala as an entrée.

Stage Manager Leslie Mihalko welcomed the dinner guests in her Santa outfit, taking the stage to Introduce the Master of Ceremonies, Comedian Jim Barnes. With guitar in hand Mr. Barnes proceeded to break all comic barriers with his adaption of “The Twelve Days of Christmas” by inserting local common irritations for the “Twelve days of Wrightwood.” No one was safe from his comedic license. Still laughing, the festively dressed audience was then introduced to Gayle and Company who performed a polished triplet of Peter, Paul, and Mary tunes. Stand-up Bass player Rob Hazard, and Folk guitarist Jim Barnes, complimented Michelle Schneider’s vocals, and Gayle Dowling’s finger picking guitar style for a four-part harmony delight.

Images of the recent Holiday Home Tour were shown on stage left, and right video screens to add to the already visually stunning stage setting. Local dance group “Four Left Feet” took over the dance floor with their energetic routine of “Run, Run, Rudolf.” Next, Jillian Honabach and Dave Larkin unlocked everybody’s heart with a smooth version of Elvis’ “Blue Christmas.” Taking a turn to something a bit more psychedelic, Chet Noll, keyboardist extraordinaire, performed one of his masterpieces, asking the audience to visualize in their heads the sounds of a babbling brook. This was a true variety show with the diverse line-up of musical styles on the same stage. Gayle and Company returned with a few more holiday favorites, backed by the versatile Wrightwood Blues Society House Band.

Bonnie Bishop and John Mark Veazey took the chill out of “Baby It’s Cold Outside” taking full advantage of Dr. Greg Jones and the house musicians. Also playing in the house band, Guitarist Grant Burkett took the lead singing “Please come home for Christmas” by The Eagles. Rob Hazard, Michelle Schneider, and Gayle Dowling sang “The Queen Of Galilee” with Gayle returning on guitar and vocals for a duo with 12-year-old singer/actor, Josephina Green performing, “Mary Did You Know?” Josephina then asked the crowd politely, to pray for peace on earth, to the audiences’ emotional approval. Santa’s Helper Leslie Mihalko returned to spice things up, singing a sexy version of “Santa Baby,” to Master of Ceremonies, Comedian Jim Barnes, making him a little nervous. Always a classic, “The Christmas Song was heartfully performed by Wrightwood’s own Claudia Campbell, who dedicated the evening to loved ones we have lost this year, with images of familiar deceased presented on the tv monitors.

“All I Want For Christmas Is You,” led by Jillian Honabach with all performers on stage, was a nice way to wrap up this Christmas present from Centerstage Productions and Wrightwood Place. The Wrightwood Blues Society deserves a big “hat’s off” for this year’s production of, “Christmas In The Woods.” When asked how he felt about the night’s performances, Dr. Greg Jones of the Wrightwood Blues Society, and Keyboardist/Singer in the band said, “Oh, I’m overwhelmed. Everyone stepped up and played their hearts out.”

Thanks, must be given to The Wrightwood Blues Society House Band members Guitarist Grant Burkett, Drummer Jeff Mitchell, Jaden Mueller on Sax, Rob Hazard on Bass, Ben Kantor on Sax and Flute, and Dr. Greg Jones on Keyboards, for being a tremendous backing band. Also musical thanks to Terry Bottorff and Tommy Dowling, Alec Bryson and Davey Schneider, Leslie Mihalko and photographer Scott Brown, including all the performers and volunteers associated with this great production. Additional thanks to Love Roots Yoga Shala, Suzi and Paul McKinney, Mountain Hardware, and The Mountaineer Progress. Thank you also to Ray and Judy Bryson for providing such a beautiful venue. Happy Holidays! 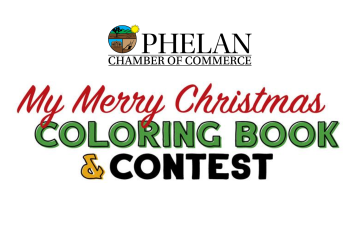