A Burglary, Shortages, and the Difficulty Behind A Mask Mandate Felt At Wrightwood Market 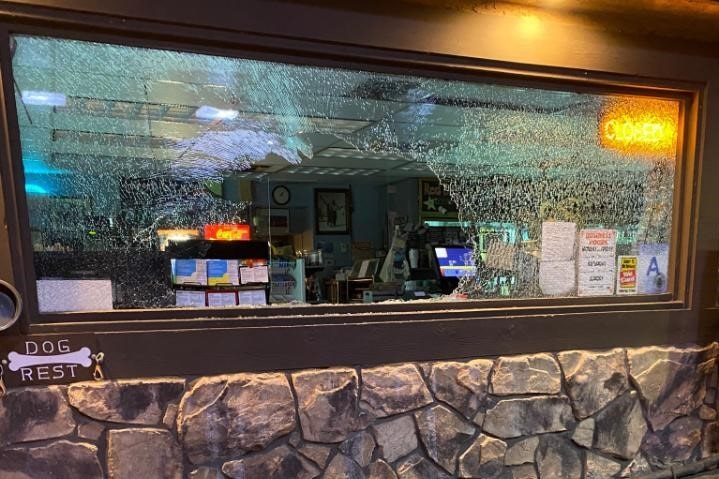 On October 11, two men smashed through front window of Wrightwood Market and stole beer, lighters, and cigarettes. No arrests have been made.

Wrightwood Market had its front window smashed and several items stolen during the after-hours of October 11. An incident Patrick Boyle, the owner, describes as a “one-off.” The past couple of months have brought their share of difficulties to the market. But between a break-in, production shortages, and a mask mandate that has surprisingly made people increasingly uncivil, the most difficult to deal with might be the mask.

In a video published on the market’s Facebook page on the 12th, a man that appears to be in his 20’s jumps into the store through the broken window and steals several packs of cigarettes. Since the video was published, it has over 18,400 views and 136 shares.

On the night of the incident, two men pulled up to the market in a vehicle and saw that it was closed. In response, they threw a beer bottle through the front window and jumped into the store. “They took a little bit of beer, and some cigarettes, and some Bic lighters and called it a day,” says Boyle about the crime. But he believes “they weren’t locals.” So far, authorities have not made an arrest in connection with the crime.

Like many other businesses, Wrightwood Market has had to deal with its share of difficulties since the pandemic hit. One of those difficulties has been shortages. “It moves around,” says Boyle about trying to pinpoint where the shortage will be next. Early on, finding masks was the problem. Then it was a particular type of cigar. It moved to Modelo beer for a few months, and now Modelo is available, but Coors Light is nearly impossible to find. He explains the shortages as “covid related delays in production.” But the pandemic has also revealed an unexpected difficulty.

As you walk into Wrightwood Market, you will find that two large orange cones are placed in front of the entrance connected by yellow caution tape. In between the cones is a chalkboard that reads, “Attention. No mask no service. Your shirt doesn’t count”. Since the pandemic began and masks have become commonplace, for some, the issue has led to a lack of civility.

“There are people that are offended by being asked to wear a mask,” explains Boyle about reminding customers of the statewide mandate. This has led to some outbursts from customers towards employees. “We’ve heard it. Over and over. From different angles, from different people, from different volumes. We get your opinion,” he says sincerely. “Let’s move on.”

As we go forward as a community during these unprecedented times, what Boyle wants is for people to “Be good to each other. Be kind to people in retail that put up with stuff you don’t see.”